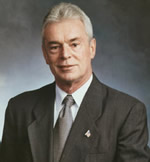 As the city’s chief executive, the mayor performs duties prescribed by the Statutes of the State of Illinois and specified within ordinances of the City of Palos Hills.

The mayor is also responsible for directing city staff and making appointments to the city’s special purpose boards and commissions.

The mayor presides over City Council meetings and can vote in the event of a tie or whenever a vote greater than a majority is required.

Email the mayor at mayorbennett@paloshillsweb.org.

The mayor is responsible for the supervision of all city officers and employees and has the power to discipline or dismiss city employees not covered by the civil service regulations.