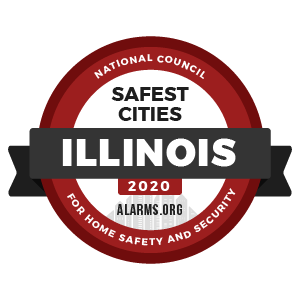 Campton Hills is Illinois’s safest community. The Kane County village is 54 miles west of Chicago, yet still considered part of the large city’s expansive metropolitan area. With just 1 recorded violent crime and 17 property crimes in 2018, Campton Hills is in a class of its own compared to other Illinois communities.

Illinois’ 2nd safest municipality is Channahon, a village of 12.8K that straddles Will and Grundy counties. Like #1 Campton Hills, Channahon logged less than 10 violent crimes in 2018, while its property crime rate is less-than-a-quarter of national levels.

#3 Palatine is a northwestern suburb of Chicago located in Cook County. The village’s remarkable violent crime rate of 0.41 per 1,000 is even lower than that of the prior entry, yet its slightly higher rate of property crime (despite being just 25% of the national rate) drops it a bit.

Palos Hills is Illinois’ 4th safest municipality. The Cook County city recorded a violent crime rate of around 1 offense per 1000 people in 2018, which is just 25% of the Illinois rate. Palos Hills’ property crime rate is impressive as well, at 4.84 per 1K.

Filling out Illinois’ top 5 is Hanover Park, a village in Cook and Dupage counties that recorded violent and property crime rates only slightly higher than those of #4 Palos Hills.

To identify the safest cities, we reviewed the most recent FBI Uniform Crime Report statistics. We eliminated any cities that failed to submit a complete crime report to the FBI and cities with populations under 10,000. This left 3,381 cities (out of a total of 9,251).

There are two broad classifications of crimes: violent crimes and non-violent crimes. According to the FBI, “Violent crime is composed of four offenses: murder and non-negligent manslaughter, rape, robbery, and aggravated assault. Violent crimes are defined in the UCR Program as those offenses that involve force or threat of force. Property crime includes the offenses of burglary, larceny-theft, motor vehicle theft, and arson. The object of the theft-type offenses is the taking of money or property, but there is no force or threat of force against the victims. ”

Data from 2,831 law enforcement agencies was then collected to determine police adequacy (TotalCrimes / Number of police employees).  We consider that the smaller the police adequacy statistic is, the safer the city is. This variable was also transformed and normalized.

Finally, the two variables were combined to create a safety score for each city.

(This original article is available from https://www.alarms.org/safest-cities-in-illinois/ as of Thursday, March 11, 2021.)